It all started on the train looking out at a series of dreary flat commercial rooftops that run alongside a stretch of railway in South London. It was a green roof opportunity waiting to happen. Or thats how it seemed to an environmental crusader and a nerdy plant person….

At last. Two years on and we’re nearly there! But it’s been a long road….

From the outset we were lucky enough to have the support of Dusty Gedge, former community activist now Green Roof Intergalactic President and a forward thinking sustainability engineer from Lambeth, Owen Davies whose obsession with sustainable urban drainage set us on a path…. 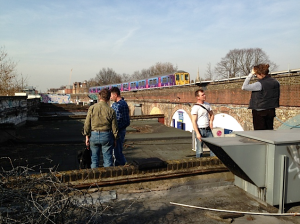 ‘The great thing about this project is the commitment of the Urban Wild Project, but also buy in and some funding from the local authority. Many pople look out over dreary roofs and dream, but having some funding and real commitment makes all the difference. I have been doing green roofs for a long time and really hope this project is a great success – especially in showing how local communities and businesses can get together to deliver good green infrastructure at a local level’.  (Dusty Gedge)

….And when I say path I mean, of course, rollercoaster. Public meetings, funding applications, surveys, events, more meetings, more surveys, green roof workshops, Green Up festival, did I mention meetings, more funding applications, billboards, kids workshops, interviews, um… meetings and of course a lot of time climbing a rickety ladder up on to the roof with anyone game enough to accompany us….(Thanks Harry for the fish and chips!) There were a series of complicated permission issues to circumnavigate plus the need to make a business case for the shopowners. Initially worried about their reaction to a community project (not all live locally), it turns out they have embraced the idea. There are of course also the difficulties of engaging the community in a project that at present only commuters can see but we do what we can with the funds and time available. In addition to the events weve done already we have plans afoot for periscopes and camera feeds and art installations and a longer-term intention to use the roofs educationally….

And now, at last, we have planning permission! Phew. If only someone could arrange a few more hours in the day…..